What It Takes to Play College Golf in 2020 and Beyond

In this article, we hope we are able to provide some advice, dispel some rumors, help navigate tricky terrain, and get you or your child on the fast track to a scholarship playing golf in college.

We approach this from experience. We both played collegiate golf — Kevin played at the University of Colorado from 2008 to 2012, and Sean played at Concordia University from 1999 to 2000 and then Morningside College from 2001 to 2003. The journey wasn’t easy, but we were blessed with certain people in our lives who made the path more manageable and we hope that we can, in turn, serve as a similar resource to you.

When we are told by parents their child wants to play golf in college, the first question we ask is this: How old are you?, or How old is your child? And when we ask we are hoping the answer isn’t “A senior in High School.” That’s not to say such a response means it’s the end of the world, but beginning the quest during senior year is a significant uphill battle. Most college programs from Power 5 schools at the Division 1 level, to Division 3 schools, already have their rosters set one year early. That means there might not be a roster spot available if you or your child are just starting the process during senior year. If there is even an inkling that you or your child might play in college, ideally the process would start during the freshman year of high school. That process would include emailing the local coaches, having a resume put together, and working with a local coach or instructor to outline the player’s goals for the next four years.

We like to help guide our clients through https://swsgolf.com/the-process/, covering every facet critical to performing their best under pressure in tournaments and being ready to play college golf. The main goal at that early age is to simply get the player’s name on the radar. That will then allow coaches to have three summers to evaluate play and watch in person (between ninth and tenth grade, tenth and eleventh grade, and eleventh and twelfth grade). After the player is on their radar, it is important to stay there. Players should email the coaches after each tournament, regardless of whether the results were favorable. If the player didn’t perform well, don’t make excuses. Coaches understand bad rounds happen. Additionally, if the opportunity ever presents itself try to get on campus and visit with the coach at some point during the sophomore or junior year. Getting on campus helps solidify that relationship with the coach moving forward.

This leads into our most important piece of advice: coaches want to see the player play in person, and when they are watching him or her play, they do not care if that results in 6 under or 15 over. If they take the time to watch a player on the course, they already know the player has talent. What they want to see is the player’s demeanor. They would much rather see the player make a triple bogey and observe how he or she responds than see three birdies in a row. They want to see a three putt and watch whether the player slams the putter into the ground or throws the ball, or if the player accept the result and battles back with a gritty par or a birdie on the following hole. A positive attitude and pleasant demeanor is all they care about in person. So if a coach is watching, don’t buy into the pressure to perform. Coaches know it’s hard to control the ball sometimes.  Remember they want to see the player control his or her emotions and have a positive attitude through an entire round of golf.

In our careers we have also heard juniors or parents talk about their results in high school golf and assume that by posting some good scores in tournaments those scores will lead to scholarships. Unfortunately, there is more to it than that. The player will need to be willing to step out of his or her comfort zone and play well without the support of teammates and on unfamiliar courses. Coaches also want to be able to recognize the names of the player’s competitors, and much of the time in high school golf that is simply not possible.

It is important to have options, so the sooner a player starts the process of preparing to play college golf, the better. A player should begin early by contacting as many coaches and making as many college visits as possible before senior year. The player needs to feel comfortable on campus and comfortable around the coach. The size of the school, the amount of scholarship money available, and quality of education all need to be taken into consideration. The coaches want to be confident in offering a golf scholarship to someone who will contribute to the team over the course of years and not drop out or become ineligible to play due to poor grades or deviating from team guidelines. The player needs to be excited about the opportunity to get a degree while receiving a scholarship to play golf at that particular school.

Important as well to remember is the fact that college golf coaches don’t merely expect their scholarship athletes to be leaders on the golf course–they also expect them to be leaders in the classroom. Playing college golf and taking on a full class load is a substantial time commitment and challenge. Classes will be missed when the team is traveling and playing multiple day tournaments all over the US. This is especially true with Division I and II programs that travel longer distances to play in two and three day tournaments. Smaller NAIA and Division III schools usually play single day tournaments closer to campus during the Fall and Spring seasons, but even those schedules are still demanding. It is wise to ask the coach and recruitment staff what resources are available for athletes to help them maintain a strong GPA while managing the demanding schedule of being a student athlete. You or your player will probably be able to tell right away if the coach has his or her players’ best interests in mind. After a scholarship is offered, it would also be wise and appropriate to then reach out to a few of the players on the team to get feedback on playing for the coach and ask what they think of the school and golf program.

We realize this a good deal of information, but it is undoubtedly a detailed and complicated process to find the perfect fit in college golf. We would be more than happy to meet up with you and your junior golfer to help lend some insight into this process and determine what your next steps would be in finding the school that best fits your academic, athletic, and social desires. 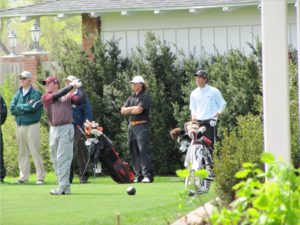